Being born in 1965, during the Baby Scoop Era of adoption, there were many secrets.

Here is a graph outlining what happened during that time, and into today regarding adoptions.

I am a person who does not have their original birth certificate ( OBC ).  It is sealed by the state of Nevada.  I have testified in front of the Nevada Legislature to open adoption records to adult adoptees.  However, we were unsuccessful in the quest to overturn the law.  This fight is not over.  In Carson City, the capital of Nevada, there is a vault.  In this vault, I am told, are the sealed adoption records.  I find it amazing that a state has a vault for holding adoptee records.

Here is an –> article from 2003 about Nevada Open and our efforts.  There is reference to a Nevada Senator’s daughter who found out she was adopted AFTER his death.  I still marvel at the courage it took for her to come forward and share her story.

There are various excuses for not telling a child they are adopted.  The parents feel they want to save the child from the “stigma of being adopted.” Or, there are family secrets such as the child is being raised by grandparents, only to find out their older sister is their mother.  Or, others may not tell about adoption out of self-interest, fear, or to cover feelings of shame and guilt.

Whatever the reasons, none of them make sense to me, at all.

Here is an –> article with questions, answers and resources for late discovery adoptees.

Many women who either chose or who were forced to relinquish their babies for adoption in the baby scoop era were told to “forget their baby.”  In the Catholic hospital were I was born, there was a “unwed mother” delivery room.  It had 2 doors.  One where the baby was taken out immediately after they were born and the 2 door where the mother was taken out after the delivery.  Neither baby or mother saw each other.  The mother was told to “forget about the whole thing,”  the “thing” being the baby she just gave birth to in that room with 2 doors.

I have compassion for so many of these women.  This quote from The Girls Who Went Away is so devastating.   “Smashed by Adoption,” feels so accurate.  I recently had lunch with a friend who recently found her birth mother.  My heart was so touched as this woman, who never forgot the baby she “gave up” cried as she shared how happy she was to have been found.  She had registered with International Soundex 15 years prior in hopes of having the child she relinquished register to find her.  And, finally, she did.  The secret was over and they are starting a new relationship.  I cried after lunch, in my car, as I was so grateful to be a small part of something huge in the their lives and this reunion.  I also felt sad that I will never see my birth mother again in his life.  Grief, even in happy times, is present. 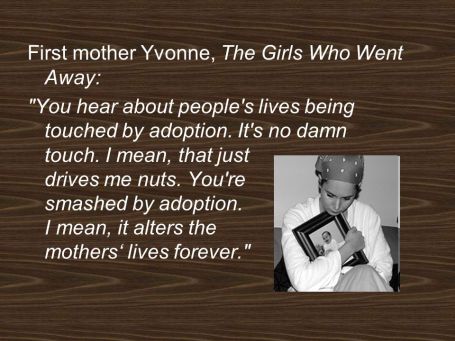 My birth mother kept me a secret…..for 51 years.  That is a long time to not even tell one person that you had a baby.   When I completed my DNA and was connected with her, 51 years of secrets came tumbling down.  At one point, she referred to me as “dirty laundry” on Facebook.  It was a hard day for me.  Very hard.  I never expected this type of response.  However, I never gave up hope of meeting her and looking into her eyes, as I had always hoped.  Even though, I was her deepest shame.  I got to make peace with  her in person.  She told a few close people in her life about me, and they were supportive, and I think this helped her be open to meeting me.

Being a secret was painful.  I remember as a little girl wondering when I would meet her.  I would look at people in the mall, at the store, at Church, in crowds, wondering, “Could that lady be the lady I came from?”  I even kept this wondering a secret because I didn’t want to hurt anyone who loved me.  Even adoptees keep secret their longings.

This site uses Akismet to reduce spam. Learn how your comment data is processed.

Adopted Jem's Gems: An adoptee's journey of survival and healing

An adoptee's thoughts and feelings on adoption through poetry, personal stories, and other writings

a story of acceptance, growth, and embracing bravery

Adoption Through the Eyes Of Adopted and Foster Kids

Uprooted and transplanted. Digging deeper into adoption from the perspective of an adoptee/first mother.

dearadoptionblog.wordpress.com/
Akin to the Truth: A Memoir of Adoption and Identity
PSYCHE CAFE

A Place the Soul Can Confront, Reflect and Embrace all that they are.

Courage is the Ability to Walk Through Fear with Faith ©

A daily selection of the best content published on WordPress, collected for you by humans who love to read.

The Art and Craft of Blogging

The latest news on WordPress.com and the WordPress community.